25 SoundCloud users were asked about their app usage. Results show that although a majority of users used the SoundCloud app, most users preferred other music apps. 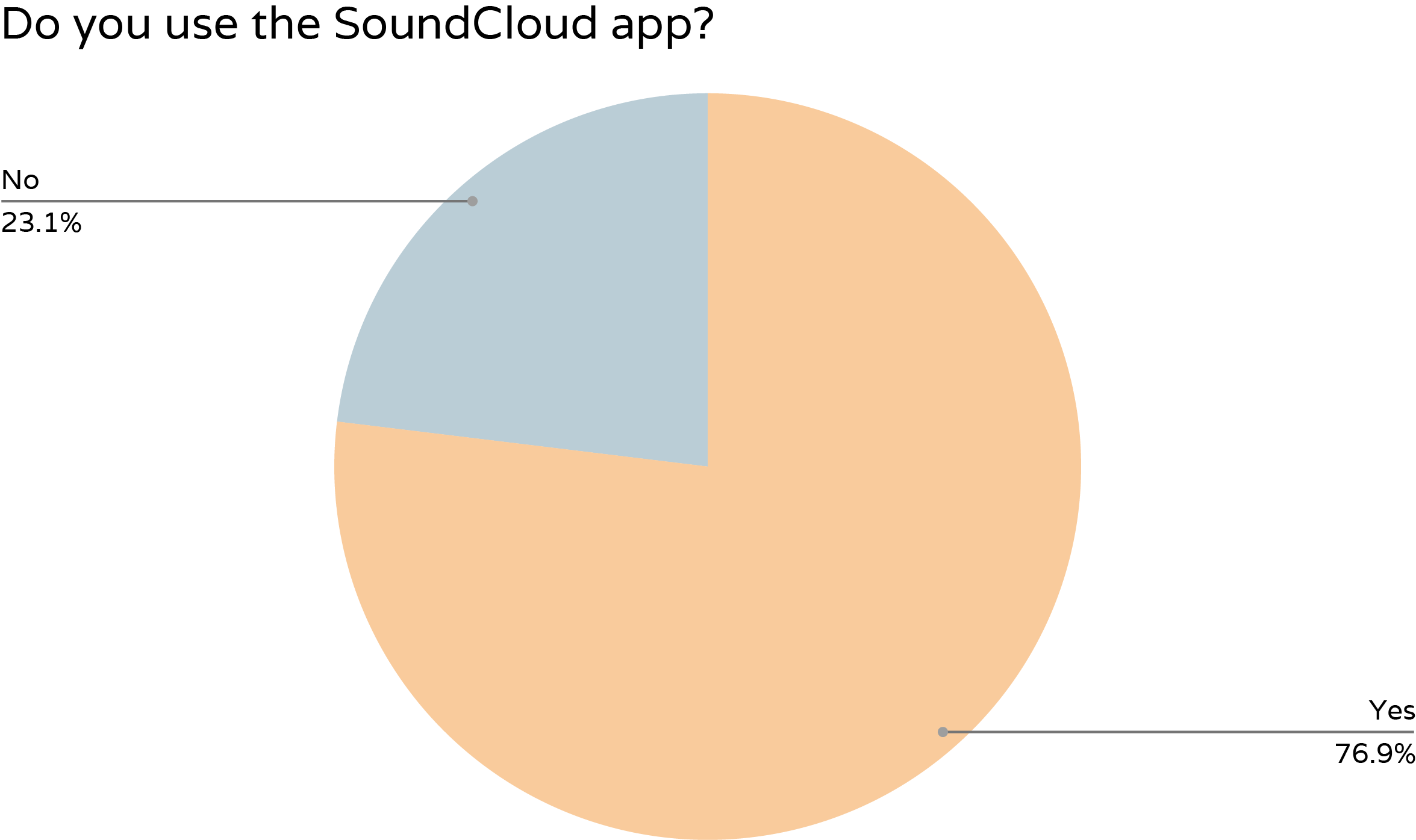 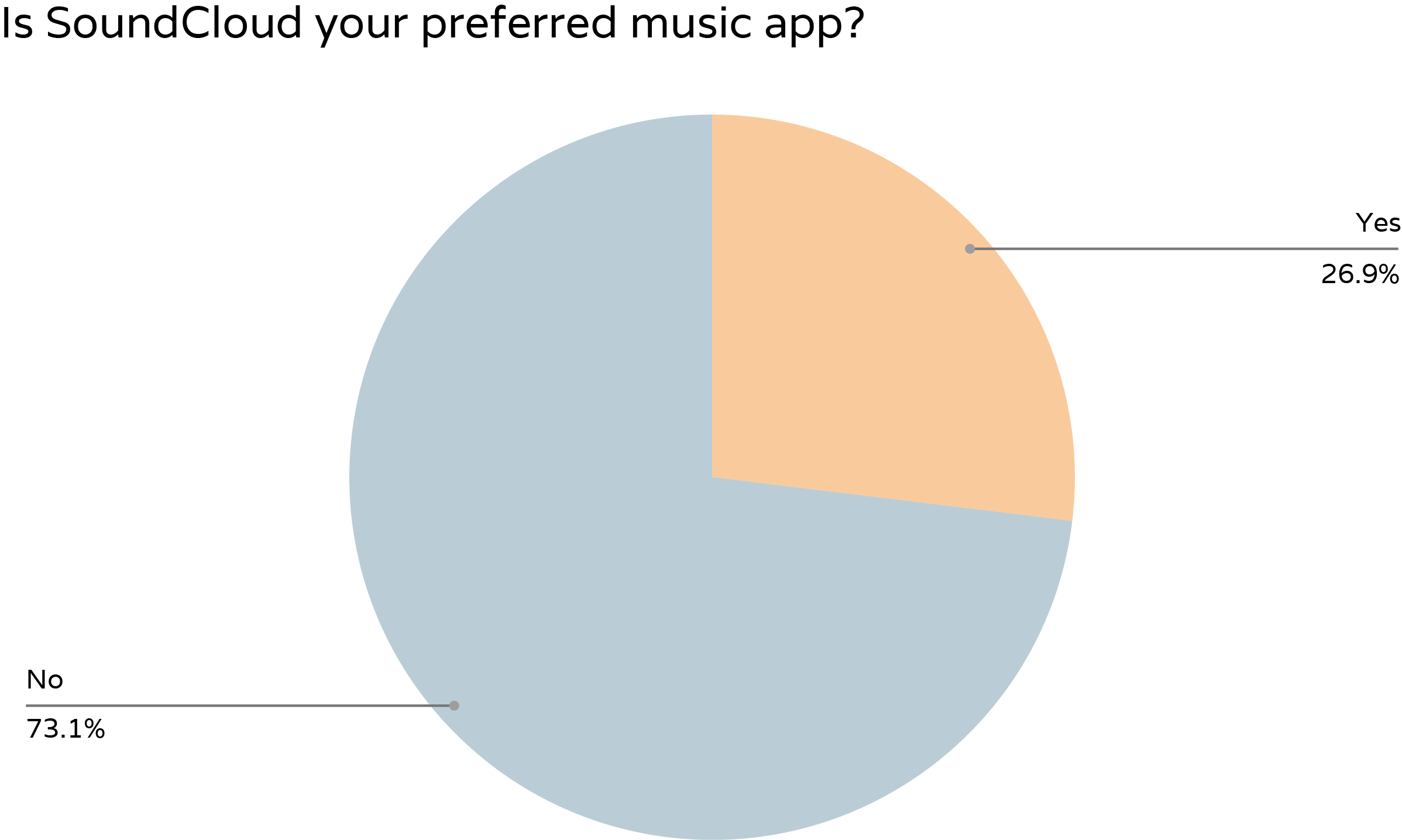 SoundCloud GO is a paid feature that allows users to listen to music ad-free, download music for offline use, and enables high-quality audio. Results show that 96.2% of surveyed users do not have SoundCloud Go, but 46.2% of those users are open to getting the subscription. 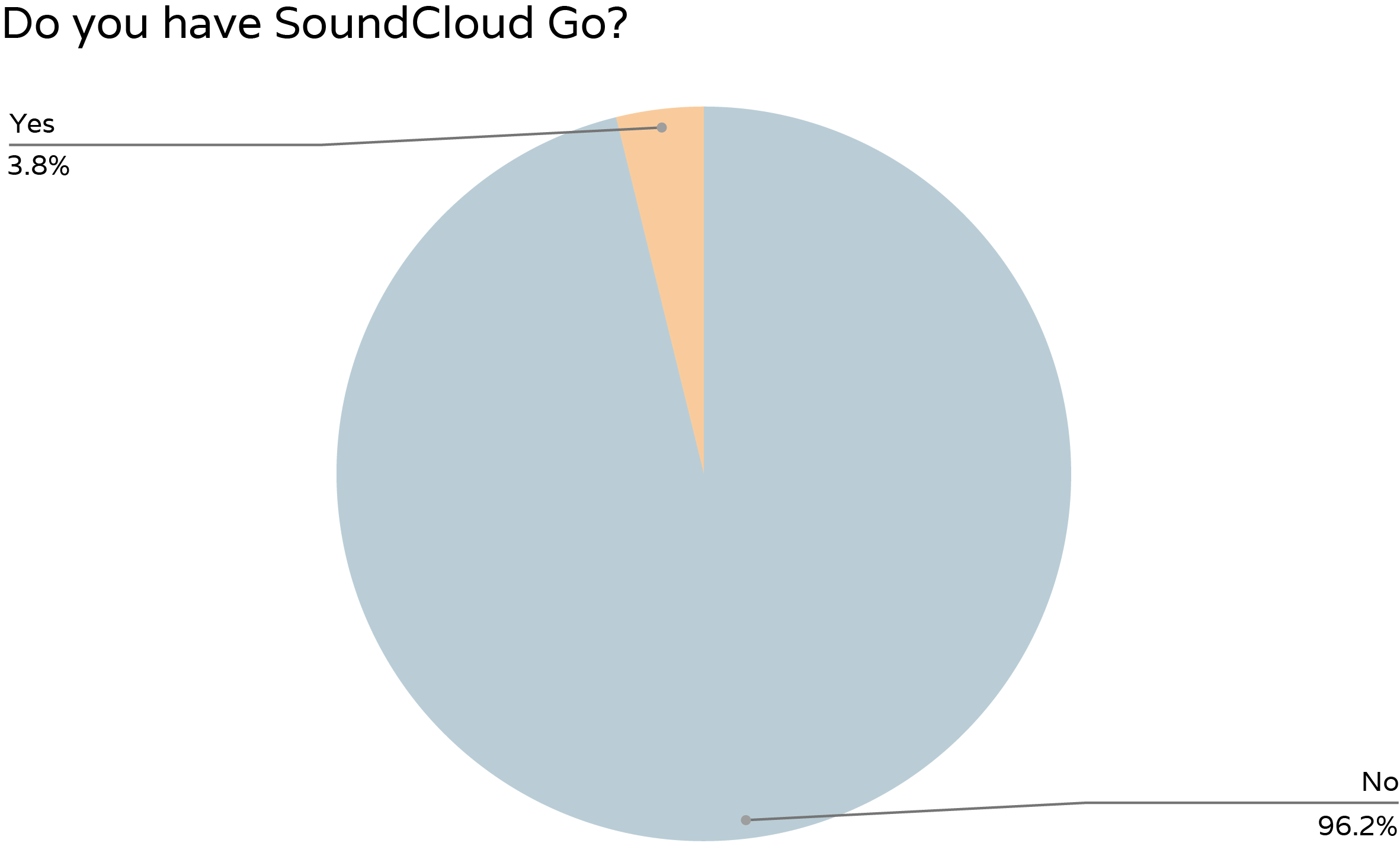 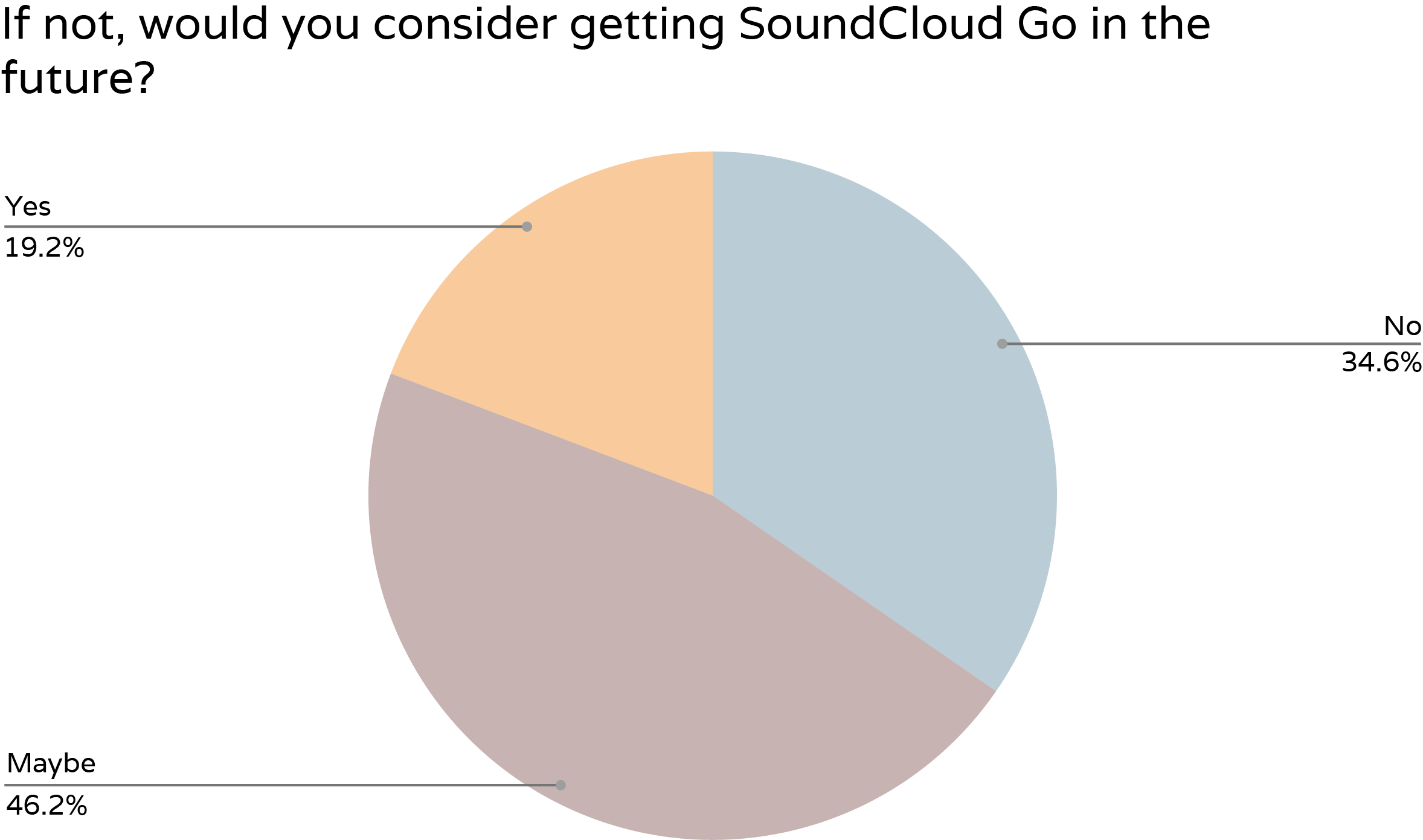 To understand what users want when paying for a music streaming app, I asked 25 users what features they look for in an app.

Create a more simplified and accessible application by reducing the number of tabs and clicks to achieve the same goal. I would change the app by allowing users to view their profile by simply clicking their picture, instead of going the extra step of clicking “Your Profile.” Further, I would include a Settings button in the corner, where it would be easier to find. I would remove the tab dedicated to SoundCloud Go because increasing advertisements may turn users off from paying or using the app. After all, half of the survey takers look for ad-free listening when using a music app. Lastly, I would change the app by making the feed on the homepage because the social aspect is the most important part of SoundCloud. Instead of listing recommended music on the homepage, I would have that in the search tab.

A solution to the repetitive tracks from multiple reposters is to consolidate the reposts into one tile. For example, a tile would say “Artist + x others reposted a track.” In addition to consolidated posts, a queue would help users choose which songs they would like to play next. This would aid the multiple repost issue by allowing the user to choose a different track to play next. This would also help users play songs that they want instead of having to choose the next song manually.

A solution would be to add an inbox icon to the profile page in the app. Doing so would allow users to easily share playlists and music to each other. Another solution when editing the profile, I would change how the banner is edited so that users could see how it would look before saving it to their profile. I would also remove the ellipsis, which indicates “more” and replace it with “Share Profile.” Lastly, I would add a feature that allows users to share playlists with other users. In this feature, added users could add music to a playlist so that everyone shared in the playlist could listen.​​​​​​​ 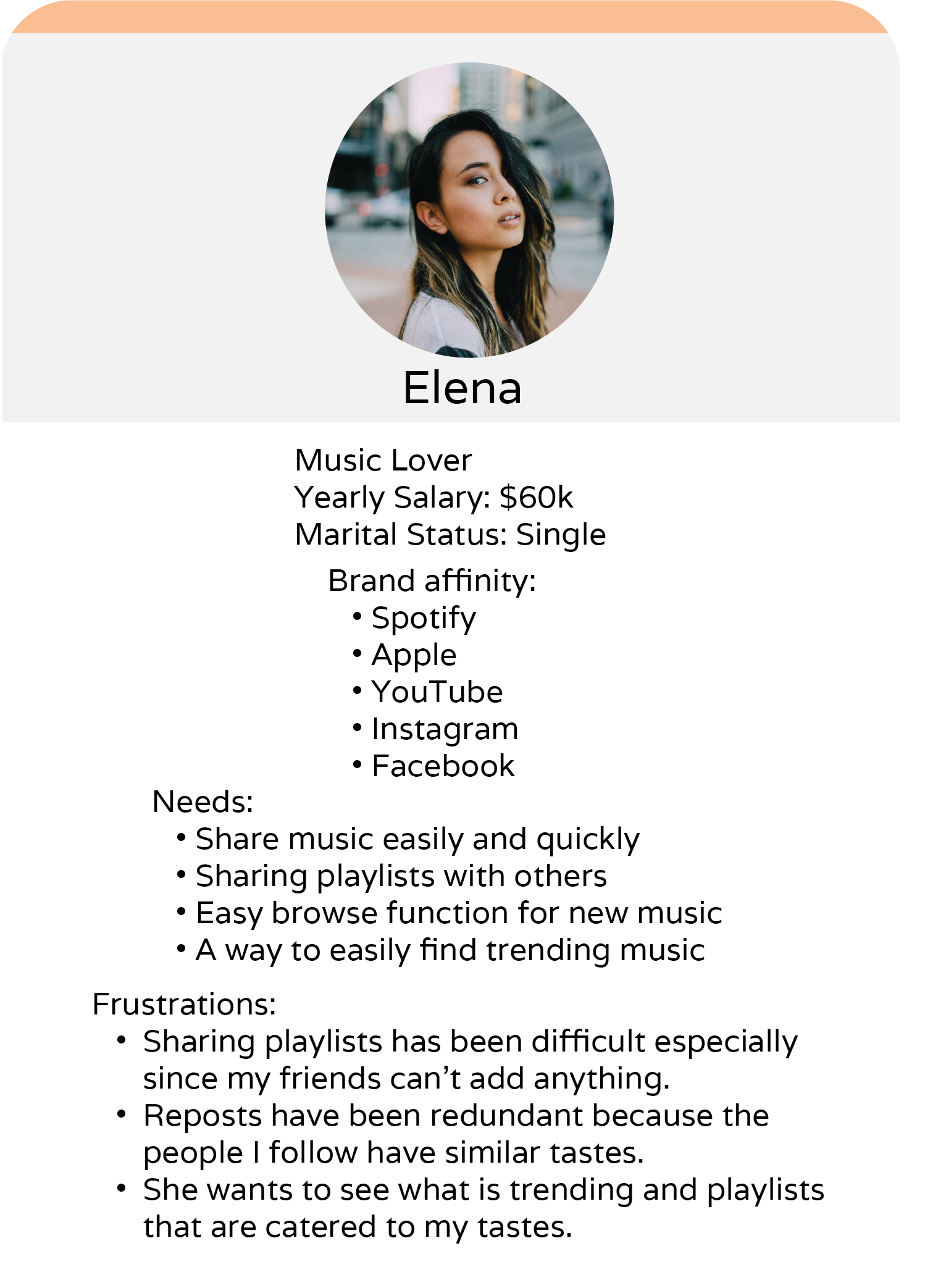 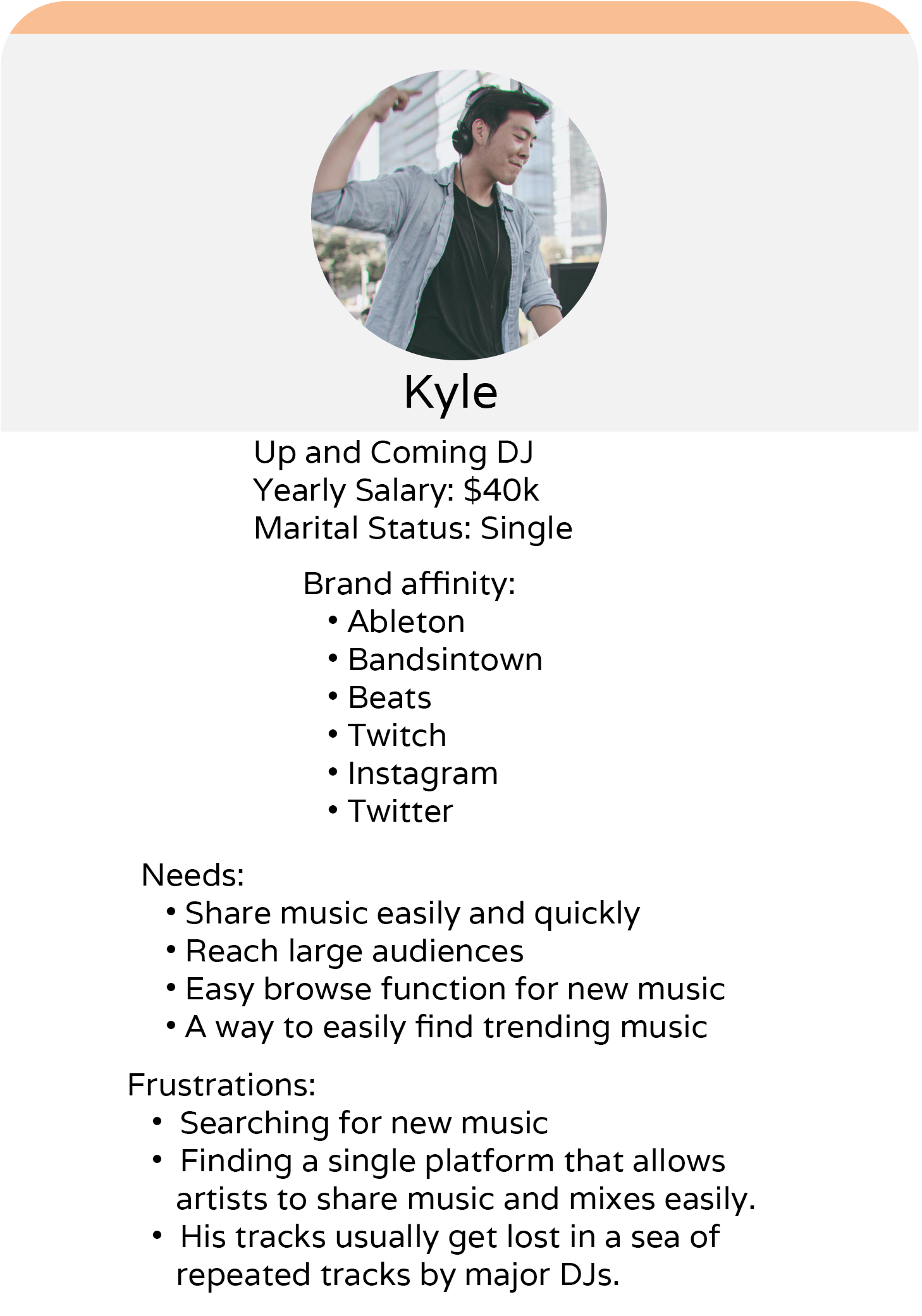 Hierarchical task inventory is a great method in showing the information architecture and user flow of the app. In this hierarchal task inventory, you can see how users would interact with SoundCloud and the necessary steps that a user needs to take in order to to get to a certain page. My main takeaway from the HTI is that some functionalities are complex when they could be simplified. For example, when a user checks their profile, they have to click library, their profile picture, and "Your profile." This shows that the user has to take three extra steps in order to get to their profile.

Incorporating the user feedback, I drastically changed the look and functionalities of the prototype. I made the icons easier to understand and minimized the amount of buttons in each tile. I also included a now playing overlay to let usersknow what song they're playing. I also included a hamburger menu for users to easily navigate to their desired page. Further, I included an option to upload music from your phone. I optimized the images foriPhone to make them easier to see.